History on the move: Curating a collection on the Queen’s Platinum Jubilee

Note: This blog post was written before the death of Her Majesty Queen Elizabeth II. The Jubilee collection has documented the end of an extraordinary reign and will hopefully serve as a basis for future researchers to understand this historical moment.

Before I started my placement at the UK Web Archive, my project idea was to build a collection about the History of London. I had thought it would give me an opportunity to delve into history blogs and history websites, and to explore how people interpret historical events; it was, however, a Jubilee year, and the opportunity came up instead to curate a collection about this very modern event, which would, moreover, unfold as I built the collection.

The particular challenges of this exercise were very attractive to someone who still considers herself an historian. It is fairly straightforward to build a collection about events that have gone past and that have been analysed by countless historians. It is a very different thing to curate a collection about events that are happening, whose consequences remain unknown. In this sense, the Queen’s Platinum Jubilee was a great opportunity because in many ways Queen Elizabeth II already belongs to History. It is entirely possible to historicise her existence and her years in power. It is also possible to use her reign as a way to look into the making of modern Britain and modern Europe, as she was present through many key historical moments in the last 70 years.

A priority which was defined early on was representing different parts of the UK, rather than focusing only on the big cities. We looked into how towns, villages and cities were celebrating the Jubilee, what events they were organizing, where street parties would take place and how councils involved local communities in the celebrations. From a geographical representation came the necessity to represent different voices and opinions, both from the UK and the Commonwealth. It was vital the collection didn’t turn out to be laudatory. Future researchers would be interested in knowing whether there was resistance to the monarchy and whether consensus was real or fabricated.

As with so many questions in History, the answer is both yes and yes. Yes, there is resistance, but yes there is genuine and even widespread appreciation for the Queen.

For the majority of my academic career, I have looked to the past to study it. Historians are used to question the archives. We have to question the silences and the omissions, we have to remember who created records, who kept them, and why. Curating this collection placed me firmly on the other side of these interrogations. I was the one deciding what should go into the collection, what should be kept for posterity. The web is vast, content is being produced every minute of every hour. It is not conceivable to include everything. The responsibility is enormous, but it made me all the more aware of the need to hear different sides, so as to not exclude voices which have often been silenced in the past.

The Web affords researchers the possibility to glimpse into facets of life and points of view that many previous historical records have omitted. It is a rich source with enormous democratic potential, and one which will become even more essential in the years to come; it must be protected and looked after. The work that web archivists do, and that I have been privileged enough to take part in, is vital to safeguard the history of the present and the future. 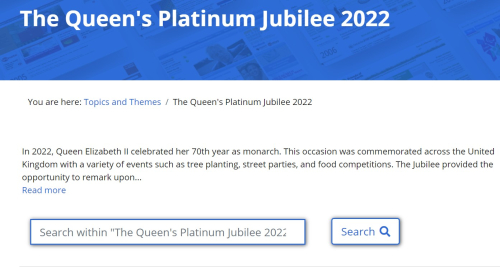