By Marja Kingma, Curator of Germanic Collections, the British Library. 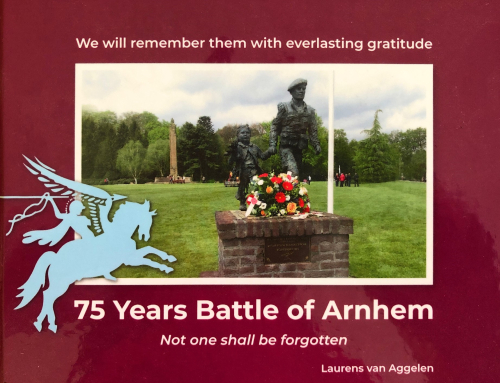 The idea to create a collection of websites about the commemoration of Arnhem75 came to RAF Museum historian Harry Raffal and myself whilst attending the seminar ‘The Arnhem Spirit - 75 years of Brits in Arnhem’, on 15 May 2019, organised by the Dutch Embassy in London. The event was part of a programme in which the Netherlands, Britain and other former Allied countries commemorated Operation Market Garden, the code name for the battle for the bridge across the Rhine at Arnhem that took place in September 1944. Allied forces consisted of British, American and Polish troops, with help from Dutch resistance.

The Battle of Arnhem 1944 is of great significance to the UK and interest in it remains strong on both sides of the North Sea.

We wanted to create a lasting memory of these events and a special collection in the UK Web Archive on the subject seemed like a good idea.

We kept the scope of the project quite narrow; only websites with a focus on the commemorations that took place in Britain and the Netherlands in 2019 are included, with the exception of some websites that deal with the historic facts regarding the Battle to give it some context.

So far over 150 individual websites within the UK web domain have been identified, of which 64 were selected to go into the collection. These sites are limited to the UK web domain, so have .uk in their domain name, or if they don’t must be hosted in the UK, or owned by UK organisations or individuals with a postal address in the UK.

Some of the websites selected for this collection include the 23 Parachute Field Ambulance, Airborne at the Bridge and Arnhem Oosterbeel War Cemetary.

For this collection you can view what has been selected through the UK Web Archive website but will need to visit a UK Legal Deposit Library reading room to view the archived content. The reading rooms across the Legal Deposit Libraries are starting to reopen now, with some restrictions, as you can read in this blog: https://blogs.bl.uk/webarchive/2020/09/ukwa-available-in-reading-rooms-again.html

How Can I Get Involved?

You can help expand this collection by sending us a URL you think may be eligible for inclusion in the collection Arnhem75. Please go to https://www.webarchive.org.uk/en/ukwa/info/nominate to nominate a website and we’ll take it from there.

Occasionally websites from non UK domains can be included, if they have a strong link to the UK and the website owners have given their permission to be included in the collection. Dutch organisations that were involved in the Arnhem75 commemorations are encouraged to get in touch.

We look forward to your suggestions!

Print
Turning to the documentation of the Rising, there are a number of interesting documents within the Library’s collections relating to the Rising. The British Library does not hold an original broadside of the Proclamation of an Irish Republic. Nevertheless, later examples of the document were acquired retrospectively.

Although the red (purchase) stamp appears on the reverse of the document, because of the way it has been mounted in the volume it is unclear when the item was acquired. It appears to read 15 May ‘59. The volume itself bears the British Museum binders stamp B.M.1961 on the inside of the rear board. These dates indicate that this item, as with other ephemera relating to 1916 Rebellion, was acquired retrospectively. 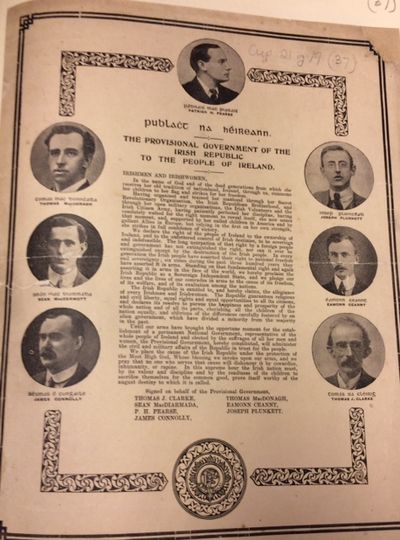 The second example of the proclamation is a more ornate affair. It is a single sheet dating from 1941, measuring approximately 325mm x 255mm. The text of the document is laid out in the same fashion as the original, but the type face has been standardised, removing the anomalies from the original, and the list of signatories has been centred rather than justified to the right as in the original. What is most striking about this item are the portraits of the seven signatories surrounding the text and connected by the decorative boarder. At the bottom centre surround in a circle is the Irish Army sunburst emblem, designed by Eion MacNeill, and interestingly it is reproduced without the inscription "Óglaigh na hÉireann" or Irish Volunteers. 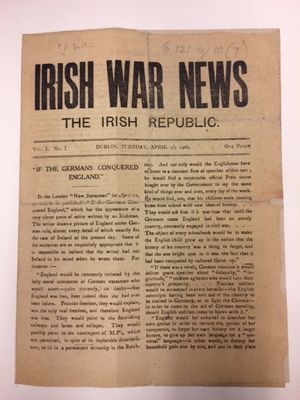 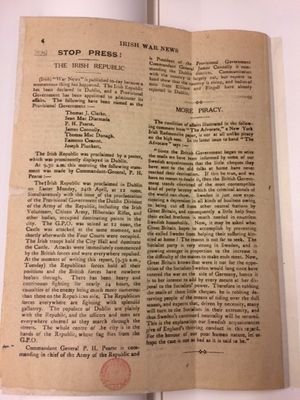 “Stop Press (Irish) ‘War News’ is published to-day because a momentous thing has happened. The Irish Republic has been declared in Dublin and a Provisional Government has been appointed to administer it is affairs.”