It is British Science Week!

Britain has a fantastic record of pioneering science that has continued into the digital age. The UK Web Archive aims to archive as much of this online scientific output as we can. Here are just some of the many science websites in the archive. Don't forget that anyone can suggest UK science websites for the archive here: www.webarchive.org.uk/nominate

The Science collection was started in 2020 and now contains over 200 different websites. The collection is wonderfully diverse - from the the British Bryological Society (Mosses and Liverworts) to the online identification site British Bugs. The collection aims to cover all areas of British science, including science communication.

We have worked closely with our partner Cambridge University Libraries to capture the amazing science undertaken at Cambridge University. This, of course, includes the late Stephen Hawking a Professor at the Centre for Theoretical Cosmology,  famous for groundbreaking research into Black Holes amongst other things. 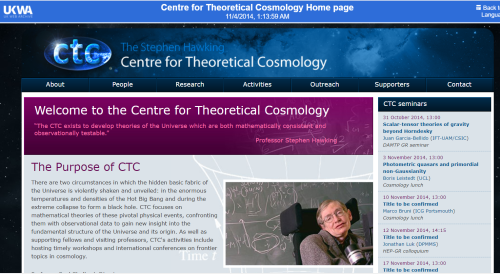 To celebrate the 200th anniversary of the birth of Charles Darwin in 2009, staff at the British Library put together the Darwin 200 collection. Would you like to read the complete works of Darwin, try Darwin Online? 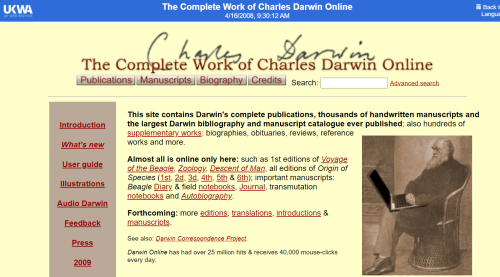 Other collections that include science elements are:

Do get in touch with suggestions for inclusion of more UK science websites: www.webarchive.org.uk/nominate

Posted by Jason Webber at 4:12 PM in Science , Web/Tech | Permalink

By Philip Eagle, Subject Librarian - Science, Technology and Medicine at The British Library A Philosopher Shewing an Experiment on the Air Pump, 1769 by Valentine Green

We have just activated our new web archive collection on science in the UK. One of the British Library's objectives as an institution as a whole is to increase our profile and level of service to the science community. In pursuit of this aim we are curating a web archive collection in collaboration with the UK legal deposit libraries. We have some collections already on science related subjects such as the late Stephen Hawking and science at Cambridge University, but not science as a whole.

We have interpreted "science" widely to include engineering and communications, but not IT, as that already has a collection. Our collection is arranged according to the standard disciplines such as biology, chemistry, engineering, earth sciences and physics, and then subdivided according to their common divisions, based on the treatment of science in the Universal Decimal Classification.

The collection has a wide range of types of site. We have tried to be fairly exhaustive on active UK science-related blogs, learned societies, charities, pressure groups, and museums. Because of the sheer number of university departments in the UK, we have not been able to cover them all. Instead we have selected the departments that did best in the 2014 Research Excellence Framework, and then taken a random sample to make sure that our collection properly reflects the whole world of academic science in the UK. We are also adding science-related Twitter accounts. Social media is generally difficult to archive due to its proprietary nature, but Twitter is open source so we can archive this more easily.

Under the Non-Print Legal Deposit Regulations 2013 we can archive UK websites but we are only able to make them available to people outside the Legal Deposit Libraries Reading Rooms, if the website owner has given permission. Some of the sites in the collection have already had permission granted, such as the Hunterian Society, Dame Athene Donald’s blog, and the Royal College of Anaesthetists. Some others who have not given permission include Science Sparks, the Wellcome Collection, and the British Pregnancy Advisory Service. The Web Archive page will tell you whether any archived site is only viewable from a library, anything with no statement can be viewed on the public web.

As ever, if you have a site to nominate that has been left out, you can tell us by filling in our public nomination form: https://www.webarchive.org.uk/ukwa/info/nominate

Most people have heard of Silicon Valley, the area of northern California famous for its concentration of technology companies, both well established and newly started. The term has in more recent years been applied to the area around Cambridge ("Silicon Fen") and perhaps most recently there has appeared "Silicon Roundabout", just a short distance from us here at the British Library. These three examples point towards the key importance of geographical proximity for economic development and for innovation in particular.

We are particularly pleased to to have started to capture some of the web archival record for the cluster of companies, educational institutions and other organisations associated with the Cambridge Network. We were particularly pleased to have been able to work with the Network, which exists to bring business and academia together to facilitate the sharing of ideas, and to encourage collaboration and partnership.

Not surprisingly, many parts of the University of Cambridge are represented in the collection, such as the Centre for Business Research or the Centre for Advanced Photonics and Electronics (CAPE).  There are the sites of organisations whose purpose is to facilitate knowledge exchange in general, such as the UK Innovation Research Centre or the Huntingdonshire Business Network. And there are sites from local government, the law, financial services, the charitable sector and the many other parts that go to make up the rich ecology of business in a local area.

And of course there are the companies themselves. Some are well-known, the majority are not. But of the 715 organisations represented in the collection, it may be that some of them grow to become household names. This collection will hopefully be of great value in capturing a snapshot of innovation in progress in a particular geographical area. Browse the collection here.

Posted by Peter Webster at 11:54 AM in Collections , Science | Permalink | Comments( 0)