I wrote about how to make websites more archivable in a previous post. Having websites archived and making an effort to make websites ‚Äúarchive-friendly‚Äù are all good steps which can help increase their longevity. This blog post is about domain names, the name you use to call your website and the address which identifies it on the Web.

To obtain a domain name, you need to pay an annual fee with a registrar for the right to use it. The rented nature of domain names means that they are not permanent and the same domain name could host completely different content at different times if it changes hands.

When planning the take-down or replacement of a website, the question of what to do with the domain name requires some thought. As well as being relevant to record-keeping, it is an important part of (business) continuity. 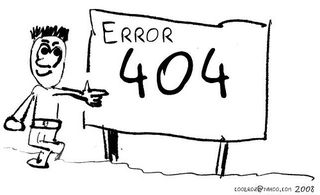 In most cases the existing domain name is used to host the new version of the website. This is usually the right thing to do ‚Äì users expect it and (if you chose the right one) a domain name often becomes a part of the identity of the website and/or the brand. Unless there are good reasons to switch to a new one, most domain names are kept when changing websites. Many websites also provide users with the option to view historical versions of the website by linking to a web archive or putting in place a landing page which points to old versions as well as new.

When a website is taken out of service, keeping the domain name and redirecting it to the archival version is also an option. This will incur a small charge in retaining the domain name; but this is much less than paying for the hosting fee and technical support to keep a website live. The advantage of this approach is seamless continuity: users are automatically referred to an archival version of the website without having to be aware of the existence of the web archive. For example, www.oneandother.co.uk, the domain name of the One and Other Project, featuring artist Antony Gormley‚Äôs commission for Trafalgar Square‚Äôs ‚Äòempty‚Äô fourth plinth in July 2009, points directly to the archival version in the UK Web Archive. Users can type the same web address or click on a link as they used to do and get to the website, despite the fact that it disappeared from the live web years ago.

Keeping the domain name may not be the right solution for everyone but it‚Äôs a possibility well worth considering.

Posted by Peter Webster at 3:16 PM

There has been some attention paid recently to the rate at which the web decays. A very interesting recent article by SalahEldeen and Nelson looked at the rate at which online sources shared via social media subsequently disappear. The authors concluded that 11% would disappear in the first year, and after that there would be a loss of 0.02% per day (that's another 7.24% per year); a startling rate of loss.

There are ways and means of doing something about it, not least through national and international web archives like ourselves. And we preserve many extremely interesting sites that are already lost from the live UK web domain.

Some of them relate to prominent public figures who have either passed away, or are no longer in that public role. One example of the former is the site of the former Labour MP and foreign secretary Robin Cook, who died in 2005. One of the latter is that of his colleague Clare Short, who left parliamentary politics in 2010 after serving as secretary of state for international development.

Organisations also often have limited lives as well, of course, and amongst our collections is the site of the Welsh Language Board, set up by act of Parliament in 2003, and abolished by later legislation in 2012. Perhaps more familiar was one of the major corporate casualties of recent years, Woolworths, which went into administration in 2009.

Some others relate to events that have happened or campaigns that have ended. In the case of some of the more 'official' sites, we in the web archiving team can anticipate when sites are likely to be at risk, and can take steps to capture them. In other cases, we need members of the public to let us know. If you know of a site which you think is important, and that may be at risk, please let us know using our nomination form.

One such site is One and Other, Anthony Gormley's live artwork on the vacant fourth plinth in Trafalgar Square. Also in the archive is David Cameron's campaign site when a candidate for the constituency of Witney in the 2005 general election. Finally, there is What a difference a day makes, a remarkable blog post from one who experienced the London terrorist attacks of 2005. All three now exist only in the web archive.

Consumers for Ethics in Research: CERES

'An independent charity set up 1989 to promote informed debate about research and help users of health services to develop and publicise their views on health research and on new treatments.'

Still available on live web? No 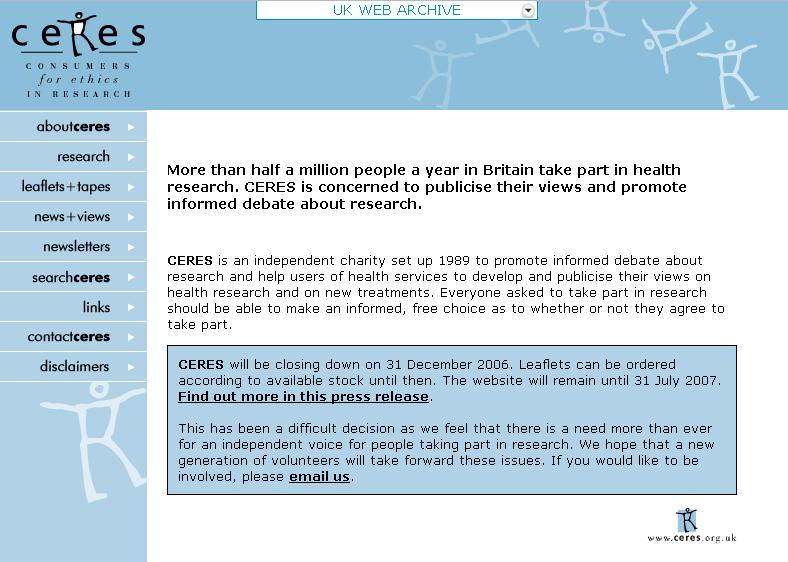 Archived by: The Wellcome Library

'Site created to help teachers, parents and professionals understand the workings of a Special School for Children with Severe and Profound Learning Difficulties'

Still available on live web? No 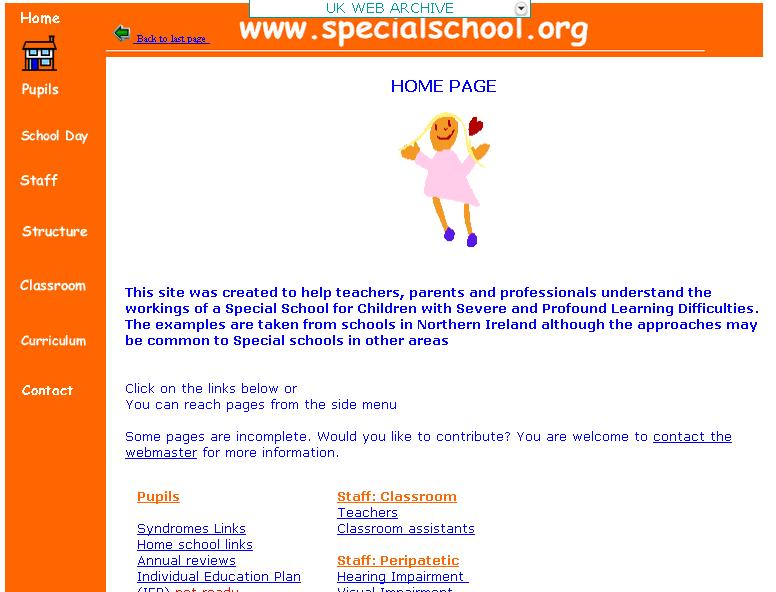 Still available on the live web? No 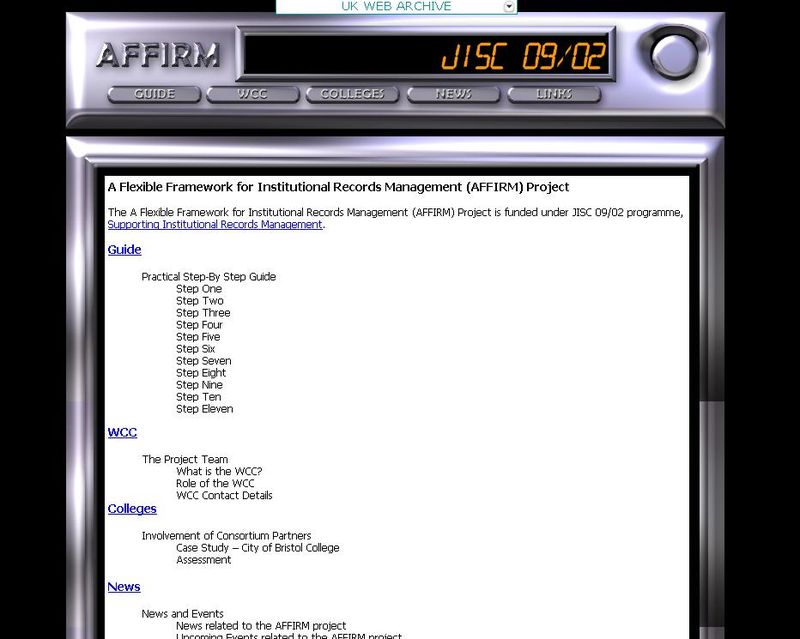 Still available on live web? No. Martin passed away in 2006. 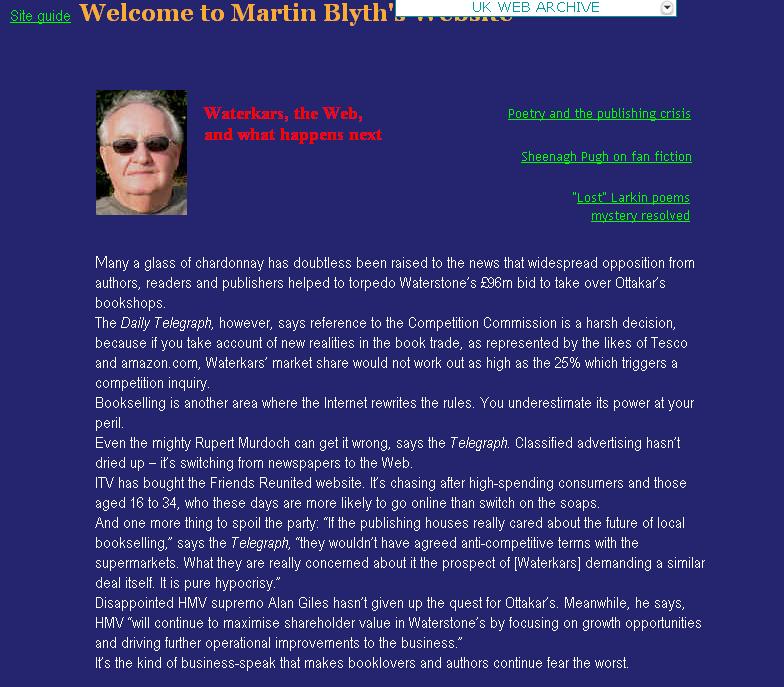 Other instances available? No

Investigation into the Circumstances surrounding the Death of Dr David Kelly in 2003.

Archived by: The National Archives

(Editors note: updated 10.14am with correct reference to live site)

Archived By: the Llyfrgell Genedlaethol Cymru / The National Library of Wales.

Still available on live web? Uncertain - whilst not a 404, only a partial view of the top banner is shown (possibly a frames issue)

Posted by Maureen Pennock at 10:00 AM