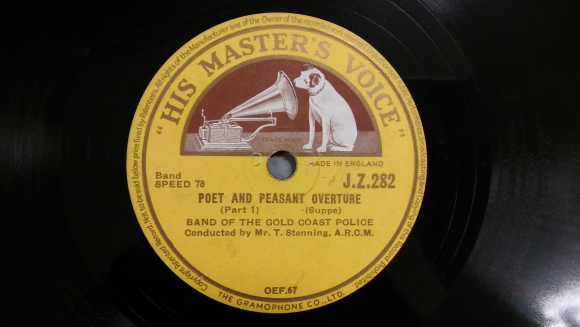 For Black History month in previous years I have highlighted the career and work of classical musicians such as Dean Dixon and Cullen Maiden.  While considering people for this year’s blog, I received a donation which included a fascinating disc.  The performers are The Gold Coast Police Band.

It used to be that many organisations in the UK had bands made up of employees.  It was a wonderful way of promoting a community spirit, a striving for excellence dependent on each individual’s hard work and commitment producing an end result of combined quality.  The Metropolitan Police Force had divisional bands, then a main band of officers drawn from the divisions.  Its demise due to cuts happened around 1997 and only a choir now remains.  One of the most famous bands from a motor works is Foden’s Motor Works Band (still extant), a large collection of whose discs recorded from 1914 to 1963 I acquired for the British Library in 2003.

The Gold Coast Police Band was formed 1917 in Ghana.  The first recruits were retired army bandsmen from the West African Frontier Force who had studied at Kneller Hall, the Royal Military School of Music in Whitton.  From 1926 to 1941 the first European bandmaster, Mr G. T. March, was in charge and in 1943 his place was taken by Thomas Stenning.  Enlisted in the 7th Dragoon Guards in 1905, Stenning went to France with the 6th Dragoon Guards in August 1914 and was granted a regular commission in the Royal West Kent Regiment in 1917.  He resigned from this in order to study at Kneller Hall to be trained as an Army bandmaster.  From 1923 to 1936 Stenning was bandmaster to the 11th Hussars (Prince Albert’s Own) stationed in India.  From there he went to the Royal Military College at Sandhurst as bandmaster.  It was in 1943 that he took up his post with the Gold Coast Police Band.  The bandsmen were all locally enlisted African men whose sole qualification upon enlistment was ‘a liking for music.’ 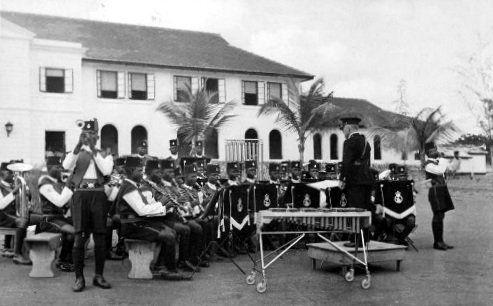 The band of thirty-five African men arrived in London by air from Accra on Wednesday 7th May 1947 for a four month tour, departing the end of August.  Two days later they were rehearsing at Hounslow before setting off on the tour.  During their stay they played in many of the London parks including, Greenwich, Victoria, Hyde and Regent’s as well as Horse Guards Parade.  On 18th May the band performed at Jephson Gardens Pavilion, Leamington Spa and on the 24th May were back in London where they led the procession from the church of St. Martin-in-the-Fields to the Cenotaph for the Empire Day ceremony.  A visit to Nottingham due earlier in May was postponed until the 27th from whence they travelled to Bath for a week of performances during the first week of June.  The highlight of the tour occurred on 10th June when the band played at a Buckingham Palace Presentation Party for 5,000 guests alternating with the Band of the Coldstream Guards.  Around this time a visit to Hendon was filmed by the newsreel cameras for Colonial Cinemagazine No. 9.

Unfortunately the film is not in colour but the newspapers described the uniforms as scarlet and navy blue with white blouses.  The band wore black shorts braided with red and had matching black caps with red tassels and wore puttees on their feet.

It was in June that the band made the first of their HMV recordings in London for sale in West Africa.  The company began recording in Accra and Lagos in 1937 and these recordings were issued with the JZ prefix.  It appears that they had made one recording in West Africa for HMV which was issued as JZ 94 accompanying J. R. Roberts in songs from The Downfall of Zachariah Fee, a pantomime by Sir Arnold Hodson, Governor of the Gold Coast Colony (and previously the Falkland Islands).

On the 20th June 1947 they recorded six sides and, just before their departure on the 29th August, six more.  As these recordings were made for the West African market they were mainly of traditional songs, with some sides conducted by Sergeant Isaac Annam.  One side was recorded with a vocal trio sung in Fanti, but there is also a disc of marches and one of Rockin’ in Rhythm by Duke Ellington.  The first recording to be made was the one classical title, the Overture to Poet and Peasant by Franz von Suppé.  The instrumental playing is of a high standard, particularly the precision of the opening quietly played brass chords.

Two years later the Daily Mirror reported that compared to pre-war trade, dealers were now selling as many as three times the number of gramophones and four times the number of records in West Africa.  In big demand were the Gold Coast Police Band’s recordings of Duke Ellington’s Rockin’ in Rhythm and an African dance number, Everybody Likes Saturday Night.

On 6th July the band broadcast on the BBC Home Service for a half hour programme and in the middle of the month travelled north where they were billeted at Crash Camp, Sandy Lane, Gosforth for performances in Newcastle.  On 16th July they lunched with the Lord Mayor of Newcastle and took afternoon tea with the Chief Constable.  A dance in their honour was given  at Albion Assembly Rooms, North Shields where a local dance band was hired to provide entertainment.  The next day, afternoon and evening performances at Exhibition Park were given before leaving for Edinburgh and an appearance at Pittencrief Park, Dunfermline on 22nd July.  The Band then headed south for a week at Warrior Square Gardens, Hastings and further performances in London and, one would hope, some time off to explore the city before their return to Accra at the end of August.

Posted by Jonathan Summers at 3:33 PM