New Acquisitions in Manuscript and Print

On 5 June 2013, the British Library bought four lots in the Mendham Sale at Sotheby's, London. The Library's view was that the sale was regrettable, and Roly Keating (our Chief Executive) expressed his reservations as joint-signatory in a letter published in The Times on 11 May. However, once it became clear that the sale would go ahead, a decision was made to try to purchase certain lots, in order to preserve some of the Mendham books for the national collection and to maintain public access to them.

The new acquisitions comprise two Books of Hours, one in manuscript and the other printed, together with two incunabula. The dispersal of the collection involved the risk that books hitherto available for research in the United Kingdom would leave the country or disappear into private hands. The British Library already has outstanding collections of manuscripts and of early printed works, so adding these books to our collections guarantees their availability to a worldwide research community now and in the future. Moreover, Joseph Mendham’s collecting activities meant that he acquired many early printed books that were unlikely to attract the attention of the institutional libraries or bibliophilic collectors of his era. 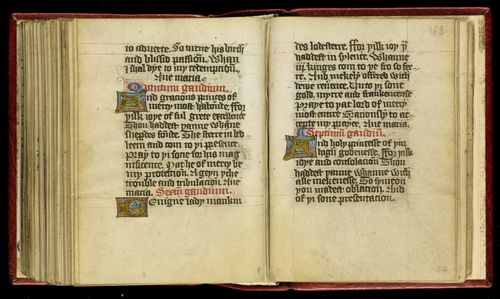 Book of Hours, Use of Sarum, with additions including Middle English verse by John Lydgate

This Book of Hours was probably made in Bruges for the English market. Early in its history the manuscript was adapted for use by a female patron, and a number of Middle English devotional pieces were added to it, among them a version of John Lydgate's Shorte tretis of the 15 joyes of Oure Lady. Not only is the context is which this manuscript was produced of great interest, but its various additions have immense research value; we are delighted that it will soon to available to researchers in our Manuscripts Reading Room. 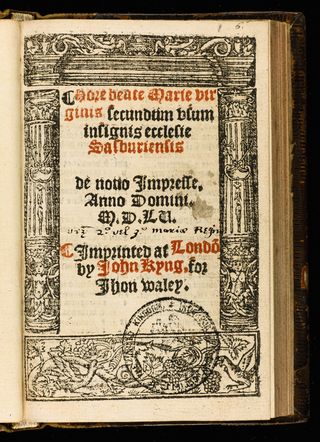 Book of Hours, Use of Sarum

This small Catholic liturgical book, produced during the reign of Queen Mary I (1553–1558), is beautifully printed in red and black, and is a unique survival in excellent condition. John King and John Walley were both early members of the Stationers' Company in London, and King's printing shop was next to that of the Royal Printer, John Cawood. Although the text was also produced on the Continent for the English market, fewer editions were produced in England. All editions now survive in small numbers, mainly because the books were heavily used and then discarded when new editions became available. Martinus Magistri’s treatise on the theory of consequence was composed by one of the leading nominalist scholastic philosophers in late-medieval Paris. Having reached its height in the 14th century, a revival in the study of consequence took place after nominalist teaching was reintroduced at the University of Paris in the 1480s. Medieval theories of this kind have become of increasing interest to modern logicians, but the texts survive in few copies. Of the 7 known editions of Magistri’s work, only 2 could be found in United Kingdom libraries, and none was previously in the British Library’s collections.

The Tractatus is bound with Johannes de Sacro Bosco’s astronomical treatise, De sphera, one of the most widely-read introductions to astronomy in the Middle Ages, surviving in numerous manuscript copies and over 80 early printed editions, 14 of them from the 15th century. None is common; these were very much books to be read and used. Indulgences were widely sold as part of the fund-raising effort to support the Knights of Rhodes against the assaults of the Ottoman Empire. Only one other copy of this printing is known, held at Munich University.

These four new acquisitions will soon be available to researchers in the Manuscripts Reading Room and the Rare Books and Music Reading Room at the British Library.