How do you find connections between contemporaneous manuscripts produced in different places? Sometimes the distinctive hand of a particular scribe is found in more than one manuscript, or the illustrations are likely to have been made by the same artist. At other times the makers of the manuscripts are unlikely to have been the same individuals, and yet their overall aspects and layout are strikingly similar—so similar that they are likely to be copies of the same exemplar. A connection of this last type between two 9th-century manuscripts – one in the British Library and one in the Herzog August Bibliothek in Wolfenbüttel, Germany – has recently been highlighted as a result of their digitisation. 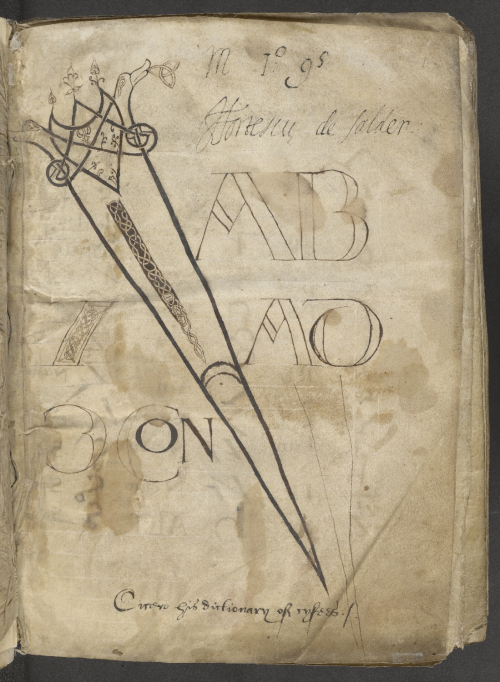 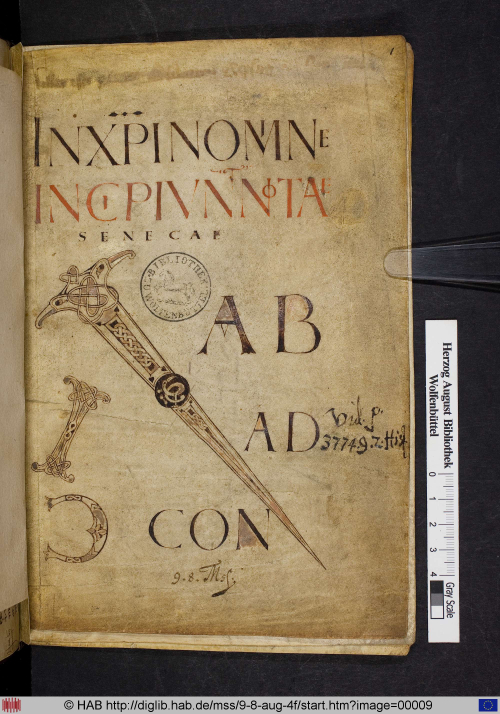 Both manuscripts are copies of the late antique text Commentarii notarum tironianarum (Commentaries on Tironian notes). Tironian notes were an ancient Roman system of shorthand which get their name from their attribution to Tiro (b. 94, d. 4 BC), the slave and personal secretary of Cicero (b. 106, d. 43 BC). They are called notes after the Latin nota, but like the shorthand systems still in use today, they consist of abstract symbols which stand for words and syllables.

The British Library’s early-9th-century copy of this text (Add MS 37518) is one of the 800 manuscripts digitised for The Polonsky Foundation England and France Project. As increasing numbers of manuscripts become available online, it is easier than ever to compare their pages side by side. This is what happened when Joanna Story (Professor of Early Medieval History at University of Leicester and collaborator on the Library’s recent Anglo-Saxon Kingdoms-exhibition) recently researched this manuscript. She recognised the layout of its opening page from elsewhere, namely the near-contemporary manuscript, Wolfenbüttel, Herzog August Bibliothek, Cod. Guelf. 9.8 Aug. 4°. 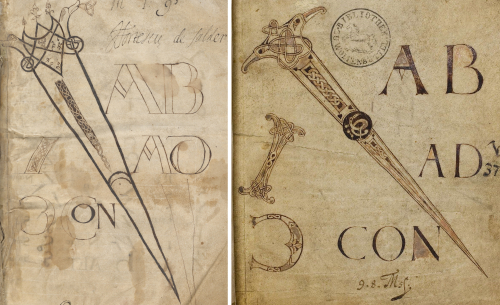 In the opening pages of both manuscripts, the decorated Tironian symbols and their abbreviations are arranged in the same positions in relation to one another. This makes it clear that they follow the same layout, despite the opening page of Add MS 37518 being left unfinished with only the dagger-shaped symbol for ab heavily outlined in black. At least 20 other early medieval guides to Tironian notes survive, but they rarely have this striking arrangement of the first three symbols. An example of a copy of this text with a different layout, included in a recent blogpost on writing systems, has also recently been digitised (Add MS 21164). 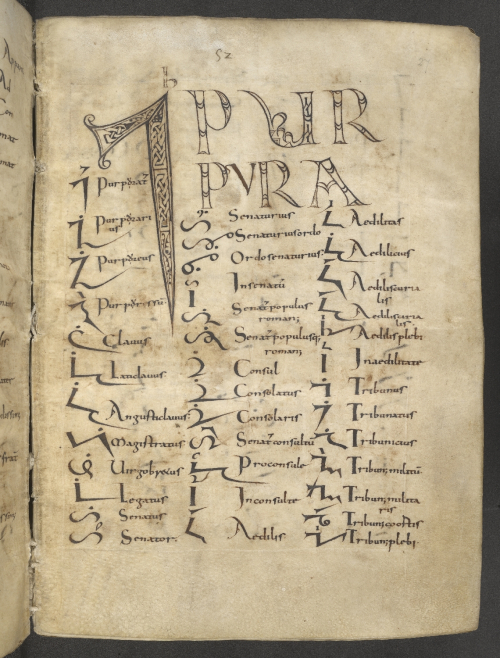 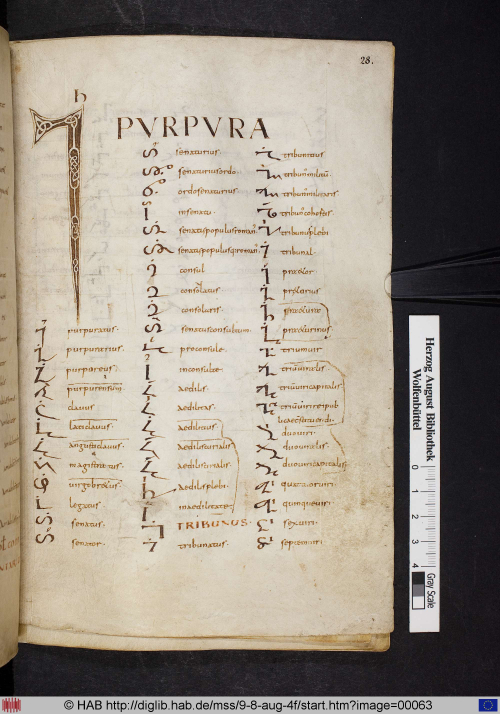 The commentaries contain a lexicon, or list of symbols and their meanings. This part of the text divides the symbols according to either topic or shape. The divisions are signalled by the writing of the first word of a group in capital script. These different groupings tend to begin in almost the same place in both the British Library and Herzog August Library copies (which are of a similar size), which further strengthens the impression that they were copied from a common, or very similar, exemplar.

Despite their roots in Classical antiquity, no antique manuscript examples of the commentaries on Tironian notes or of texts written in Tironian notes survive. Instead, the vast majority of evidence is found in Carolingian manuscripts. The Carolingian dynasty ruled over the territories of the Franks (roughly modern-day France, Belgium, Netherlands and Western Germany) from the mid-8th century, but gradually lost control over these territories throughout the late 9th and 10th centuries. 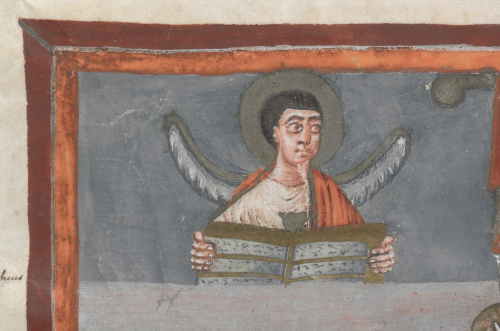 The Carolingian interest in shorthand was part and parcel of the revival of learning, art, and book production often known as the Carolingian Renaissance. In the Admonitio generalis (General admonition), an important collection of legislation issued in 789, the most famous Carolingian ruler, Charlemagne (r. 768-814), implored that schools be established for the learning of not only the Psalms, chant, and grammar, but also notae, or ‘written signs’.

Based on the surviving manuscript evidence, certain Carolingian monastic schools took a particular interest in Tironian notes. The scriptorium at Tours seems to have been one of the earliest centres to master this shorthand system, even including it in its famous illustrated pandect Bibles, such as the Moutier-Grandval Bible. Occasionally an entire book might be written in Tironian notes, such as this late 9th-century copy of the Psalms (Add MS 9046), which you can see in the British Library’s current exhibition, Writing: Making your Mark. 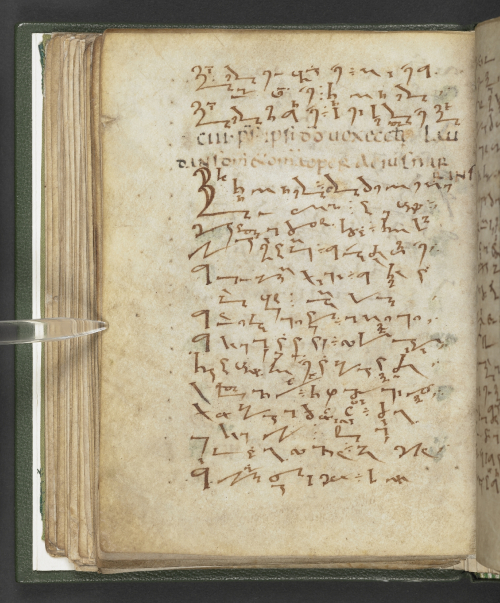 The schools that produced our two connected manuscripts – Saint-Germain-des-Prés in Paris, and Saint-Amand, in north-eastern France – are c. 200 km apart. That they nonetheless seem to share a common exemplar demonstrates how closely connected Carolingian scholarly communities were.

Emilia Henderson, with thanks to Joanna Story