When I am asked which is the most important Malay manuscript in the British Library, there is no simple answer. Should I cite the two copies we hold of the Sejarah Melayu, ‘Malay Annals’(Or 14734 and Or 16214), recounting the founding of the 15th-century kingdom of Melaka, and arguably the single most famous Malay text? Or the oldest known manuscript of the earliest historical chronicle in Malay, the Hikayat Raja Pasai, ‘Chronicle of the Kings of Pasai’ (Or 14350)? Or one of the finest illuminated Malay manuscripts known, a copy of the Taj al-Salatin, ‘The Crown of Kings’, written in Penang in 1824 (Or 13295)? Unmissable from this list of the great and the good of Malay writing is the Adat Aceh, ‘The Statecraft of Aceh’ (MSS Malay B.11), a compendium of court customs, regulations and practice from the greatest Muslim sultanate in Southeast Asia in the 17th century. 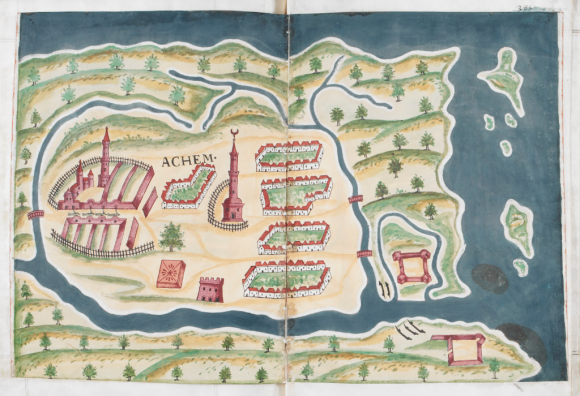 The Adat Aceh was compiled against the backdrop of the struggle for the throne of Aceh from 1815 to 1819 between two rivals: the incumbent Sultan Jauhar al-Alam Syah, who had accrued many internal enemies; and the preferred choice of the nobles of Aceh, Sultan Syarif Saiful Alam, son of a wealthy merchant based in Penang, who was descended from a line of former Arab sultans of Aceh. Both sides had different British backers, and the East India Company authorities and mercantile community in Penang were closely involved in this affair. The final dates found in the Adat Aceh are the installation of Saiful Alam as Sultan on 12 Zulhijah 1230 (15 November 1815), and Jauhar al-Alam’s subsequent flight to Penang on 1 Muharam 1231 (3 December 1815). However, ultimately Jauhar al-Alam prevailed, and with the support of T.S. Raffles was restored to the throne of Aceh in 1819. [On this period in Aceh history, see Lee 1995.]

The manuscript of Adat Aceh in the British Library is written on English paper watermarked ‘W Balston 1815’, and was most likely copied shortly after that date. The dedication on the first page shows that the book was presented by W.E. Phillips ‘to his valued friend’ Sir Robert Townsend Farquhar (1776-1830). Phillips served in Penang from 1800 to 1824, latterly as Governor, while Farquhar was Lieutenant Govenor of the island from 1804 to 1805. 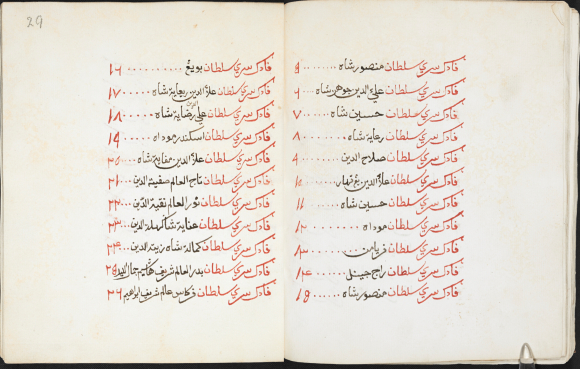 The manuscript of Adat Aceh contains a number of different texts. The first two pages (ff. 2v-3r) contain a note on the duration of the world: Pasal pada menyatakan umur dunia tatkala turun Nabi Allah Adam sampai kepada hari kiamat iaitu tujuh ribu tahun lamanya, ‘Section on the age of the world, from the time of the prophet of God Adam to the day of judgement, being seven thousand years’. This is followed by the first major part, entitled in Arabic Mābain al-salāṭīn and in Malay Perintah segala raja-raja, ‘Regulations for kings’ (ff. 3v-26v), ascribed to Ismail bapa (father of) Ahmad. Containing advice for kings, the text is divided into 31 majlis or parts; the end of majlis 5 to the first part of majlis 24 was evidently missing in the older source from which the Adat Aceh was copied in 1815.

The second part of the Adat Aceh deals with the history of the sultanate. A listing of 37 rulers of Aceh is given on four pages (ff. 28r-29v), followed on ff. 31r-47v by a chronological account entitled Silsilah segala raja-raja yang jadi kerajaan dalam Aceh bandar Darussalam, comprising a summary of Acehnese dynastic history from the initial Islamization to the early 19th century, culminating in the crowning of Sultan Saiful Alam as mentioned above.

The third part of the manuscript (ff. 48r-102v) is the Adat majlis raja-raja, ‘Customs and regulations of the kings’, containing a detailed description of protocol for rulers and court officials, including regulations for ceremonies for the fasting month, for two main religious feasts, for making obeisance to the king, for the royal procession to the mosque on Fridays, for the royal bathing party on the final Wednesday of the month of Safar (mandi Safar), and for the night vigil of Lailatulkadar in Ramadan, and concludes with an enumeration of court dignitaries (ff. 103v-111r). The lengthy fourth and final part of the text (ff. 111r-176r) is a detailed account of regulations for the port of Aceh. 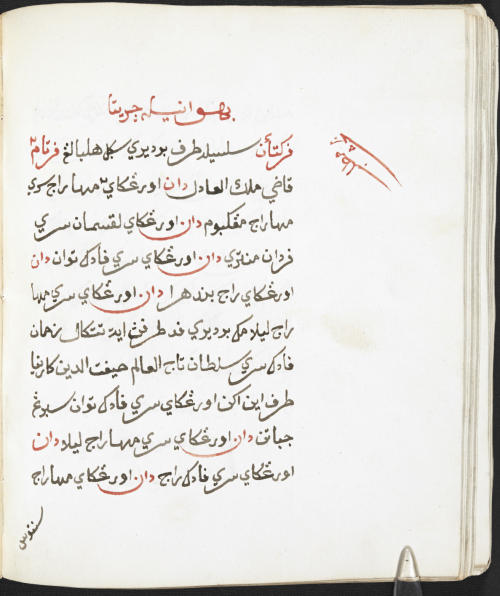 Silsilah taraf berdiri segala hulubalang, section on the order of precedence for the line up of chiefs. British Library, MSS Malay B.11, f. 103v

In acknowledgement of the exceptional historical significance of its contents, particularly the third and fourth parts, which appear to date mainly from the 17th century, the British Library copy of Adat Aceh, MSS Malay B.11, was one of the first Malay manuscripts to be published in facsimile in 1958. Perhaps reflecting the technical limitations of the period, but also the then prevailing lesser appreciation of the codicological value of paratexts, the facsimile included catchwords and some textual corrections, but not marginal annotations indicating new paragraphs (Drewes & Voorhoeve 1958: 8), which can only now be seen in the digitised version of the manuscript. As discussed in an earlier blog post on the Mir’āt al-ṭullāb by Abdul Rauf of Singkel, the Malay use of the Arabic words maṭlab (section, part) and baḥth (discussing, about) in the margins of books to highlight new topics appears to be unique to Aceh, and can involve considerable artistry in presentation. While these marginal signposts in the Adat Aceh lack decorative embellishments, they are elegantly presented calligraphically in red ink, slanted at an angle to the text. 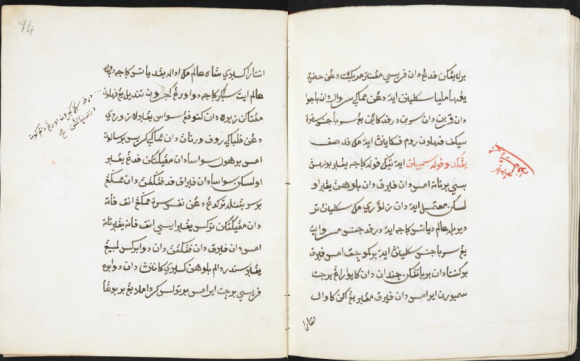 Adat Aceh, section on the ceremonial procession for the feast of hari raya haji (Id al-Adha), with on the right, marginal annotation indicating the section on the 30 individually-named palace elephants, and on the left, a textual correction. British Library, MSS Malay B.11, ff. 73v-74r 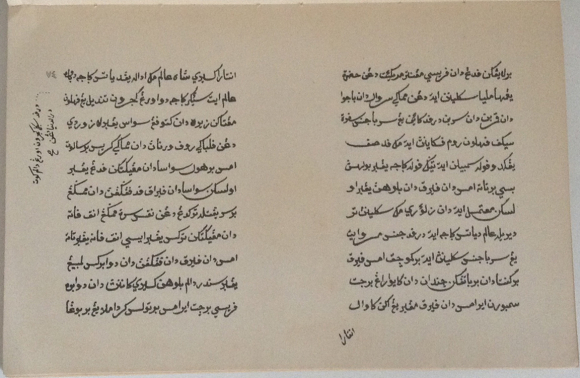 Published facsimile of the same pages, with added page numbers, and without the marginal subject indicator on the right, but on the left with the textual correction graphically re-orientated to fit on the page (Drewes & Voorhoeve 1958: 74a-b)

On the basis of notes in another manuscript of the Adat Aceh in Leiden collected by Snouck Hurgronje (Cod.Or. 8213), Voorhoeve concluded that the Adat Aceh was probably compiled in late 1815 by one of the most senior court officials, Teuku Ne’ of Meurasa, from documents in the royal archives of Aceh. A copy (B) was brought to Penang in late 1815 or 1816, from which the present manuscript BL MSS Malay B.11 was copied. By the time of publication of the catalogue of Indonesian manuscripts in Great Britain in 1977, Voorhoeve had found out that (B) was held in Edinburgh University Library as Or. MS 639, and that pp. 25 and 26 of that manuscript were lacking in BL MSS Malay B.11. The lacuna occurs on f. 14r of the BL manuscript and the missing two pages of text can now be supplied from the Edinburgh manuscript which appears to have been written by the same scribe. Download Transliteration of EUL Or MS 639 pp. 25-26 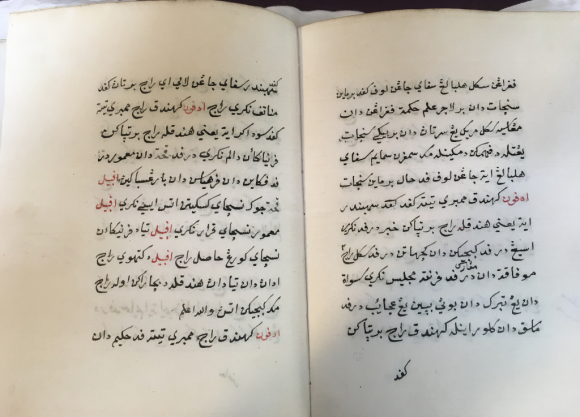 Adat Aceh, showing the pages missing from the BL manuscript, from majlis (part) 4 of Perintah segala raja-raja, ‘Regulations for kings’, relating to communications with chiefs (hulubalang), harbourmasters (syahbandar) and merchants (saudagar). Edinburgh University Library, Or MS 639, pp. [25-26]. [With many thanks to Paul Fleming of Edinburgh University Library for providing this image.] 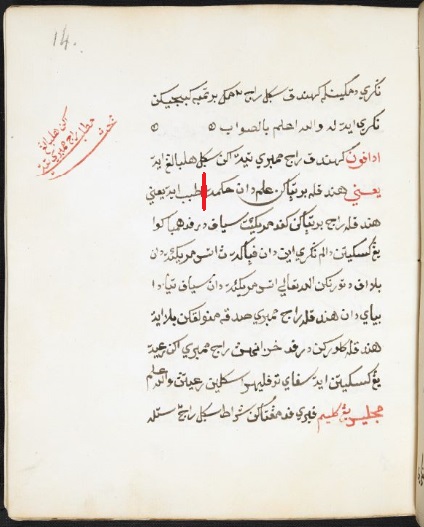 The BL manuscript of Adat Aceh is a neat copy of the Edinburgh manuscript shown above, written by the same scribe, but he mistakenly left out two full pages at the point indicated by the red mark between the words hikmat and tabib. British Library, MSS Malay B.11, f. 14r

The Adat Aceh is a treasure-trove of information on state, statecraft and trade in 17th-century Aceh, and its importance was recognized even very shortly after its compilation. Although our manuscript does not bear a title, the text was named Adat Achi by T.J. Newbold – one of the most perceptive early scholars of Malay writing – in an article published in 1836 in the Madras Journal of Literature and Science, and in 1838 Newbold presented his own manuscript of the work to the Madras Literary Society. English translations of parts of the Adat Aceh, perhaps based on MS (B), were published by Th. Braddell in the Journal of the Indian Archipelago in 1850-1851. The facsimile publication by Drewes and Voorhoeve in 1958 gave wider access to this work, and two romanised transliterations have been published in Indonesia (Lamnyong 1976 and Harun & Gani 1985). The Adat Aceh was the subject of an important Ph.D. by Takashi Ito (1984), and Ito (2015) has also recently published two volumes of the contemporary 17th century Dutch East India Company records on Aceh, affording an opportunity to compare Malay and Dutch sources on Aceh from the same period.

Posted by Annabel Gallop at 3:19 PM