War-Painting: the End of Futurism

We have recently added a new book to our Italian Futurist collection. Guerrapittura is an important example of the synergy of text and graphics in Italian Futurist books. Some other acquisitions were made for the exhibition Breaking the Rules. The Printed Face of the European Avant Garde 1900-1937 in 2008, and our collections are constantly growing. 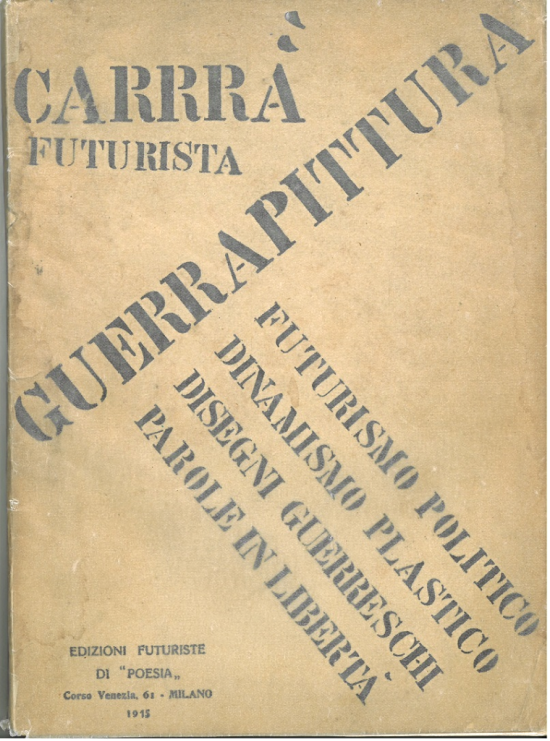 The Italian painter Carlo Carra’ wrote Guerrapittura (‘War-painting’) in 1915, when the First World War had started but Italy had not yet entered the conflict. His words are an important contribution to the interventismo (interventionism), where artists and intellectuals played a huge role in lobbying the public opinion to enter the War.

Guerrapittura is Carra’s last contribution to the Futurist movement. From 1917 he joined the painter Giorgio De Chirico on his conception of pittura metafisica. His patriotic views are expressed quite strongly in Guerrapittura, the war being an ‘incentive to creativity’ and a way to celebrate the ‘Italian creative genius’. The War is seen as the climax of the futurist way of thinking, an encounter between art and life, the last step towards an industrialized world. Literature and painting meet in the book, which features the iconic leaflet ‘Sintesi futurista della guerra’, authored on 29 September 1914 by Carra’, together with Marinetti, Boccioni, Piatti and Russolo. The ‘words in freedom’ in the leaflet celebrate FUTURISM vs TRADITIONALISM. Futurism is represented by Russia, France, Belgium, Serbia, Italy, Japan, Montenegro, Great Britain, against the traditionalism of Germany and Austria. 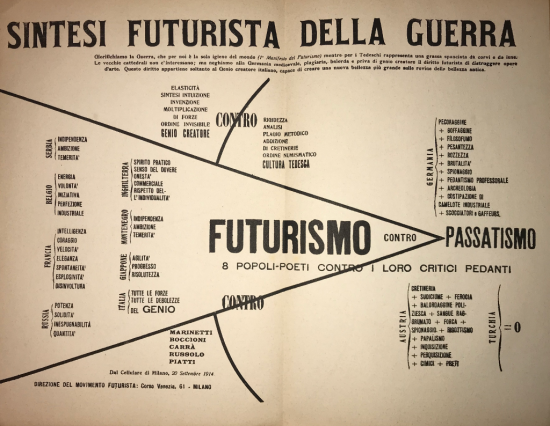 The violence and ugliness of war are ignored in his words and in those of his fellow futurists, like in the magazine Lacerba, whose intolerant and anti-democratic views mirror those of Carra’ in Guerrapittura. Lacerba’s short life was linked to the interventismo from 1913-1915 and its reason to exist ceased when the war started. The last issue of Lacerba, dated 1915, celebrates Italy entering the War. 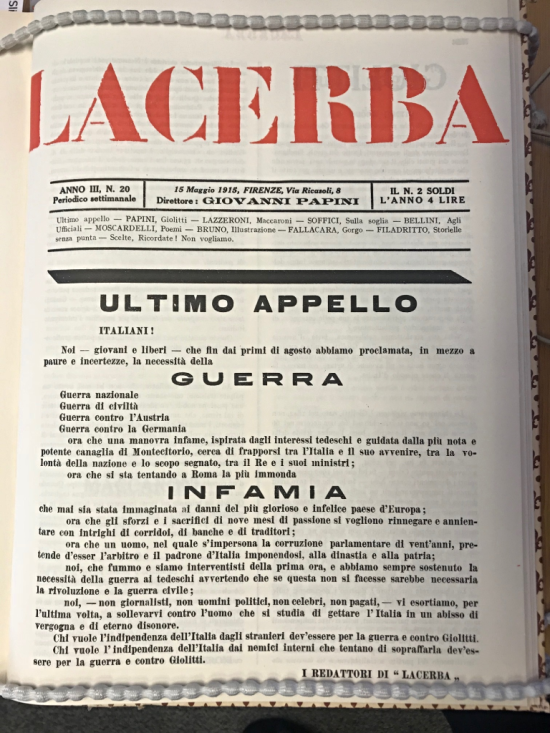 The acquisition of Guerrapittura has been made possible by the Mirella De Sanctis special fund for the purchase of Italian books.