From the flint axe to the electric washine machine, human beings have generally tried to lighten the physical load in their lives and increase comfort and pleasure. In 18th-century Europe, new technologies burgeoned for ever more purposes. From Jethro Tull’s seed drill to increasingly sophisticated mechanical clocks, new inventions were both discussed in learned journals and sold at various metropolitan and provincial fairs throughout France and England. That science and technology were servants of a wider humanity was an idea that Revolutionary France extensively explored and implemented. The imposition of the kilometre and kilogram brought order, uniformity and mutual understanding and, indeed, the guillotine itself replaced protracted, labour-intensive methods of execution with an instantaneous and humane one. 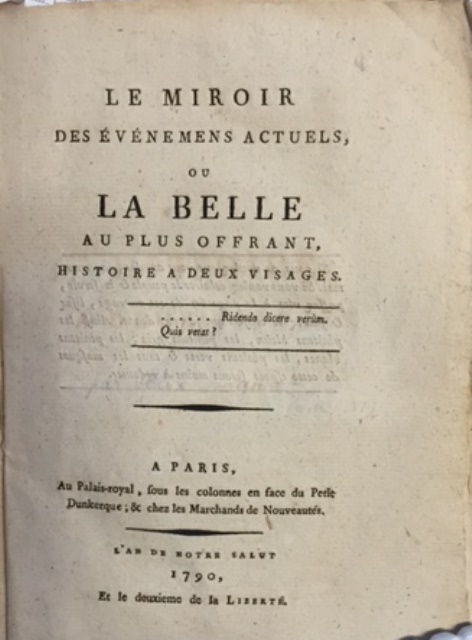 The story develops through the person of Aglaonice – a young, intelligent woman – who offers to marry the man who will create the most ingenious machine to win her heart. Six suitors then come forward. The first two discredit themselves by the scientific incompetence and pointlessness of their inventions. The third and fourth suitors reveal themselves as fraudsters intent only on swindling the gullible. The fifth suitor is named Frankestein, as comely in person as he is in character. He offers a self-locomoting statue which plays a range of music of exquisite beauty. Understandably, Aglaonice desires him but accepts his advice to see the sixth suitor before making her decision. This final suitor’s machine is also an automaton which manufactures jewels. Since his invention combines superior technological ingenuity with financial stability and wealth generation, Aglaonice chooses him as her husband. Her sister marries Frankestein.

The mechanism to make these automata function is not described but Aglaonice’s examination of each invention is strictly rational and scientific. If it fails against its scientific claims, she rejects it. Her criteria are also ethical, requiring the betterment and greater happiness of human beings and not just simple scientific achievement without social purpose. Therefore, only that which brings wealth and beauty into the world wins Aglaonice’s heart. Frankestein’s ethics match Aglaonice’s. By not pressing his initial advantage but wanting the sixth suitor’s invention to be seen, he ensures the greatest good of the greatest number. He thus exemplifies the “new man” advocated by so much Revolutionary rhetoric - devoted to the general welfare rather than to private benefit and reflecting the social optimism which was so strong in the first phase of the Revolution.

In the text, both the fictional and factual interweave rather awkwardly but are humorous and serious by turns with occasionally the texture of journalism. The French reading public of 1790 would have immediately understood the social and political events and technological developments to which the many puns, leitmotifs and wordplays refer. The author also supports his purpose with frequent digressions into science and natural history. The story ends with an unsurprising attack on the obscurantism and authoritarianism of the Catholic Church and a demand for its exclusion from all social and political power.

Since 1818 and the first publication of Mary Shelley’s Frankenstein, there is also the teasing question of the relationship, if any, between her novel and Nogaret’s novella. Certainly, the name of  Frankestein echoes in Frankenstein and unnamed beings are artificially created in both cases. Otherwise, these two works mirror each other only in their points of opposition.

The creatures made by Frankestein and the sixth suitor serve what La Mettrie believed to be the purpose of human nature which is the search for and creation of hedonism and delight in life. These automata are made to bring exclusively these things to human beings. They cannot do otherwise. The medical scientist Dr Victor Frankenstein, however, assembles and reanimates a human corpse just because he can. The scientific achievement is justification enough for his actions.  The being that he creates inherits the fullness of human nature. It demands love but is physically unlovable and Dr Frankenstein denies it any possibility of love. In return and of its own free will, it chooses to destroy the loving relationships of others. 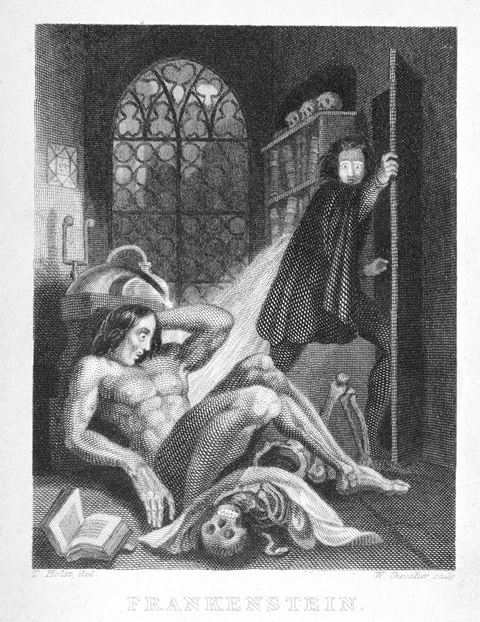 There have been suggestions that Shelley’s Frankenstein may be a story describing how the French revolutionaries lost control of the Revolution which became a deadly behemoth and that Nogaret’s novella was a possible source for her story. Without firmer evidence, these must remain suggestions.