80 Years Ago: the Berlin Olympics in Words and Pictures

Tonight, and for the next two weeks, the eyes of the world will be turned on Rio de Janeiro for the ceremonies and contests of the 31st modern Olympic Games. 80 years ago, the focus was on Berlin, where perhaps the most notorious of modern Olympiads was well under way. The 1936 Olympics had been awarded to Germany before the Nazis came to power, but the new regime, despite initial suspicions about the internationalist spirit of the Olympic movement, quickly adopted the Games as a showcase and propaganda vehicle for their ‘new Germany’. 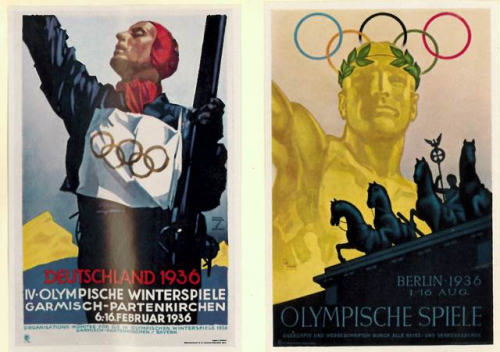 Much has been written about the 1936 Games and the surrounding controversies. The British Library, of course, holds a wealth of material, both British and German, on the topic, but we also have a number of German books published at the time to celebrate the Games.

Despite its title, the large-scale Olympia 1936 und die Leibesübungen im nationalsozialistischen Staat was published ahead of the Games and so has little to say about the actual event. Most of its 687 glossy pages are devoted to the history and current state of Olympic sports in Germany. The authors claim to identify Germanic folk traditions at the root of many popular sports, and emphasise the importance of sport in building a healthy nation. Chapters have titles such as ‘Handball – an ancient German sport’ or ‘Physical education as a national-political task’, and most end with fiercely patriotic exhortations and celebration of the ‘German fighting spirit’. 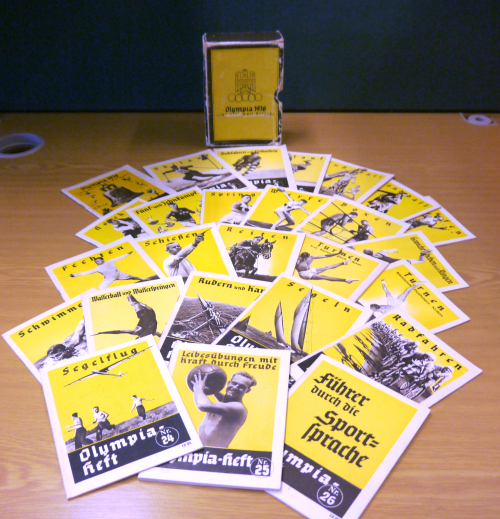 Serving a similar purpose, but aimed at a more modest audience, is the series of 26 small Olympia-Hefte, pamphlets issued in the run-up to the games by the ‘Propaganda Committee for the Olympic Games’ and available for 10 Pfennigs each from party offices, workplaces and sports clubs. A brief historical introduction to the Olympics (Heft 1) is followed by 23 pamphlets focusing on individual sporting disciplines in the past and present, ending with a plug for the ‘Strength through Joy’ organisation (Heft 25) and a glossary of sporting terms (Heft 26). The idea was to encourage the general public to take up sports themselves, something today’s Olympic host countries still seek to achieve among their citizens. 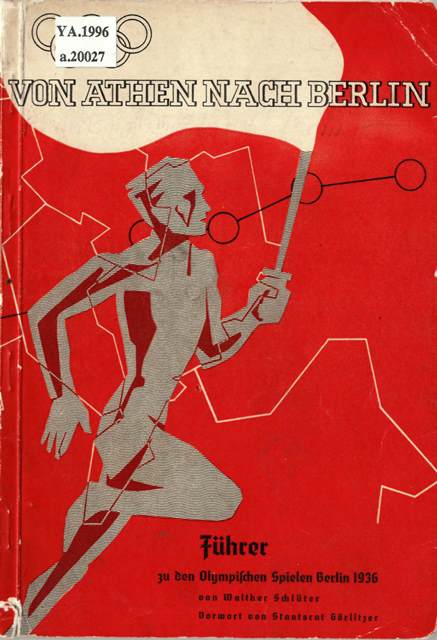 Another modest-looking production is the guidebook Von Athen nach Berlin. Its title and striking cover refer to the torch relay, an invention of the 1936 Games which endures to this day. Although in many respects a practical guide, complete with blank tables where the names of medallists in each event can be filled in, the publication also sets a strong propaganda tone: an essay on the ancient Olympics describes their Greek founders as ‘an Aryan people’, and later the author exhorts his readers to show foreign visitors that ‘we are once more a united people … knowing only one goal: Germany.’ 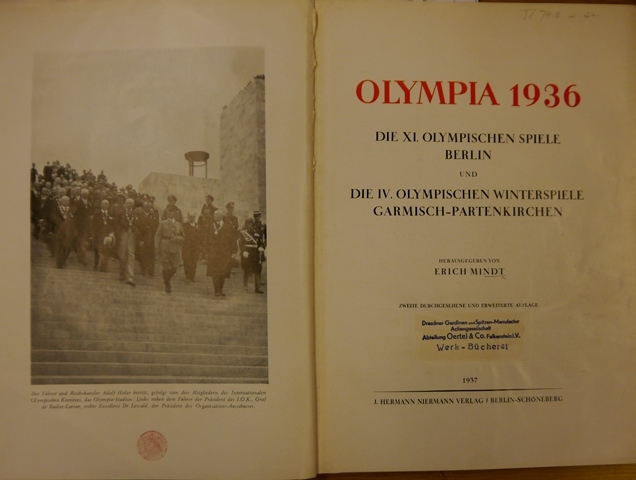 The books in our collections which were issued after the Games tend to be somewhat less overtly propagandist in tone. For example, souvenir albums Die Olympischen Spiele 1936 and the two entitled Olympia 1936, record events and results with little comment as to the nationality or race of the medallists, and none can ignore the fact that Jesse Owens was the outstanding athlete of the Games. Some, however, acknowledge this through gritted teeth: So kämpfte und siegte der Jugend der Welt (Munich, 1936; 7915.w.16) pointedly emphasises the race of Owens and other black runners almost every time they are mentioned, and adds details of the best white and European performers in the events won by black and American athletes. And casual ideological asides can appear in unexpected places: one of the Olympia 1936 publications explains how much work had to be done to cleanse Berlin of run-down and ugly bulidings, ‘the remnants of the Marxist regime.’ 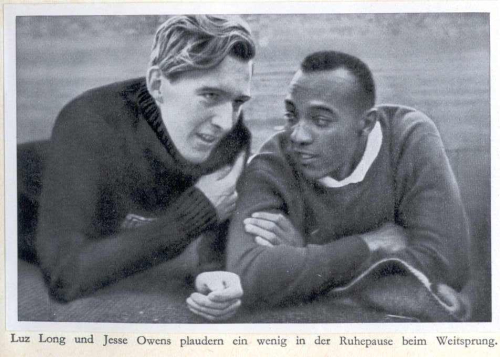 All these books are also well illustrated. Indeed, in the case of Die Olympischen Spiele 1936, published by the Reemstma tobacco company,  the whole point was to fill in the album with pictures bought using vouchers given away in cigarette packets. But perhaps the finest illustrated book, although smaller and less lavish in format, is Was ich bei den Olympischen Spielen sah, by the Games’ official photographer, Paul Wolff. Here the focus is as much on the experience and challenges of photographing the games as on the actual events, and Wolff includes an appendix listing the technical details of each picture. The photographs included are a mixture of action pictures of the sporting events, artistic images of the stadium and ceremonies, and informal shots of athletes, spectators and technicians. Wolff’s interest in the technology of recording the Games reflects another theme common to most of the books: a pride in the technical achievements that enabled the Berlin Games to be broadcast around the world and individual events and performances to be judged with greater precision than ever before.

A starting pistol and a camera for filming photo-finishes: the latest technology as shown in  Die Olympischen Spiele 1936 ...

Many of the features of these books – pride in a nation’s achievement in hosting the games and in the successes of the home team – are common to every host country’s recording of their Games. But the abuse of Olympic ideals by a repressive fascist regime give these books a particularly sinister spin, and remind us why the 1936 Olympics will remain particularly notorious in the history of the Games.

More information about some of the items mentioned here, and a bibliography of modern and contemporary books on the 1936 Olympics can be found on our archived Sport and Society webpages. 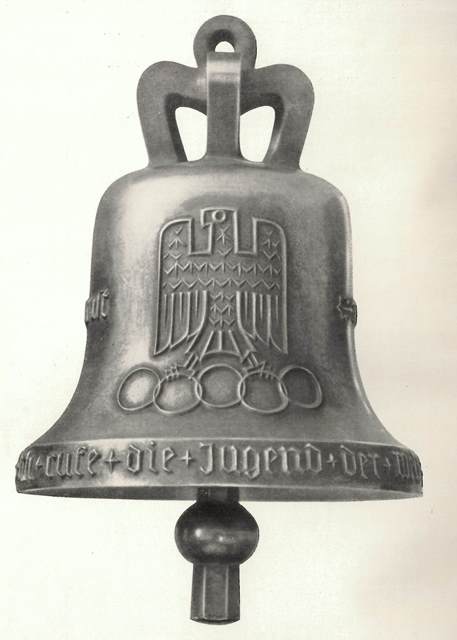 The Olympic Bell, one of the major symbols of the 1936 Games, with its motto ‘Ich rufe die Jugend der Welt’ [‘I summon the youth of the world’]. Image from Olympia 1936...